Forcing to continue with an unwanted pregnancy is also violence. Failure to comply with Constitutional Ruling 0206/2014. 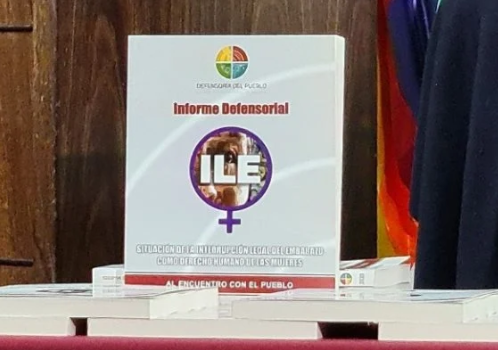 In Bolivia, as in the rest of the world, violence against women is a structural problem that affects a large number of women and their families. According to the Survey of Prevalence and Characteristics of Violence against Women 2016[1], 75 out of every 100 married or cohabiting women suffered some type of violence by their partners.

Violence against women is characterized by a pattern of abusive behaviors that can include: physical abuse, emotional or psychological abuse, sexual abuse and 14 other forms of violence contemplated in Law No 348 of the Plurinational State. However, little is said about the obligation to continue an unwanted or unplanned pregnancy, the result of rape, or, for example, when the woman's life is at risk, this is also violence. Many girls and women are forced to continue their pregnancies for various reasons, including legal prohibitions on the termination of pregnancy, or, when it comes to legal terminations contemplated in Constitutional Ruling 0206/2014, preventing them from accessing this right for multiple reasons that have to do with stereotypes and/or personal positions that take precedence over compliance with national regulations.

Plurinational Constitutional Ruling 0206 / 2014 establishes that a woman may access a legal and safe abortion in cases where the pregnancy is the result of rape, incest, statutory rape, and when as a result of the pregnancy, her life or health is in danger. In these cases a formal complaint or accusation is not necessary, only the presentation of a report of the rape, incest or statutory rape and the consent of the victim. A copy of this report is the only requirement that the doctor must request in order to proceed with the legal termination of pregnancy.

But how much progress has been made in complying with Constitutional Ruling 0206 / 2014 and its technical procedure to guarantee women and girls a legal termination of pregnancy in Bolivia? During 2019, the Ombudsman's Office and Ipas Bolivia conducted an Ombudsman Report on the SITUATION OF LEGAL INTERRUPTION OF PREGNANCY AS A WOMEN'S HUMAN RIGHT in the context of compliance with Plurinational Constitutional Ruling 0206/2014 and the application of the technical procedure for the legal termination of pregnancy (ILE)." The research was conducted at the national level in 44 public hospitals of second and third level, through the application of the instruments of ombudsman verification to direct and indirect personnel, as well as obtaining information from the Plurinational Legislative Assembly, the Ministry of Health, Ministry of Education, Sports and Cultures, departmental health services and municipal governments.

The main conclusions of the report reflect, on the one hand, the lack of guarantees for the exercise of women's sexual and reproductive rights. Thus, most women who come to a hospital with a pregnancy resulting from rape are subjected time and again to questioning by medical personnel about their decision to have an abortion procedure performed, either because of prejudice, ignorance of the law or arbitrary decisions, situations that cause anguish, pain, suffering and re-victimization of women.

On the other hand, the failure to comply with the technical procedure for the legal termination of pregnancy violates the right to live a life free of violence, as not all hospitals have the infrastructure, equipment, medicines and supplies for the performance of legal termination of pregnancy, resulting in non-compliance with the technical procedure approved through RM 027/2015 of 29 January 2015 and the Model of Comprehensive Care for Victims of Sexual Violence, thus putting the health and lives of women and girls at risk.

Another area of concern is the lack of knowledge of Constitutional Ruling 0206/2014 and the technical procedure. The majority of health care providers are unaware of the requirements that must be presented by the user requesting an abortion. Only 8% of the people consulted know in which cases a legal termination of pregnancy is appropriate. In addition, it was found that

28% of those interviewed considered that judicial authorization is still a prerequisite for abortion, and 25% were aware that in cases of sexual violence, the client must sign the informed consent form and a copy of the complaint, with no other additional requirements.

Eighty-seven per cent of those surveyed said that children and adolescents must be accompanied to the hospital by a family member; if not, health facility staff contact the competent authority to provide accompaniment. Similarly, they refer to persons with intellectual disabilities.

As a result of these violations, health facilities do not comply with the timeframe for care. Seventy-five percent of the total population surveyed is unaware that legal termination of pregnancy must be performed within 24 hours of requesting the service.

The recommendations made in the Ombudsman's Report are aimed at complying with current regulations in favour of girls and women, which will have a positive impact on their health and lives. It also proposes the development and enactment by the Legislative Assembly of regulations on sexual and reproductive rights that promote a comprehensive approach to sexual and reproductive health and thus comply with the exhortation made by the SC 0206/2014 to this legislative body.

Thus, comprehensive health actions to address abortion include a package of interventions ranging from sex education to improving access to contraceptive methods and abortion services in a safe, timely and free manner, which must be guaranteed within the framework of a true public health policy. This package of care must be implemented in the national public and private health system in such a way that its operationalization guarantees that the services provided for abortion are of high quality in the framework of the human rights of women and girls.

1] National Institute of Statistics (INE) and Ministry of Justice. Survey on Prevalence and Characteristics of Violence against Women 2016. Available at: https://www.ine.gob.bo/index.php/encuesta-de-hogares-seguridad/

Chataboo contest: an initiative of Ipas Bolivia and the Youth Directorate